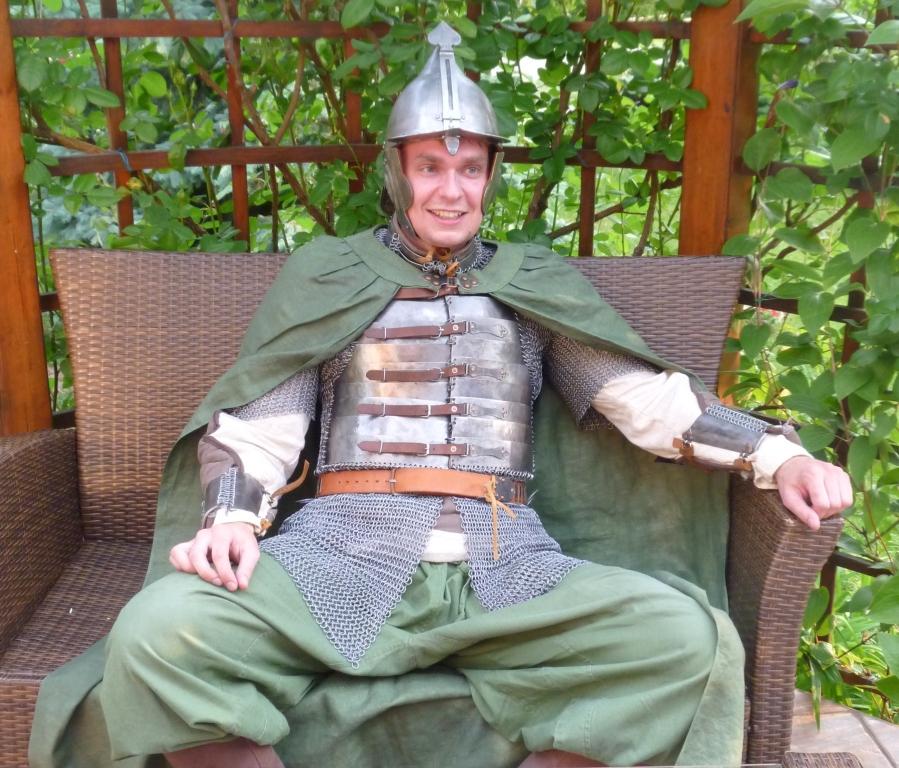 My name is Tibor Szebényi, I am a Hungarian veterinarian, and a serious reenactment enthusiast.

As a child I always wanted to be a (western European) knight (of the 16th century) clad in full armour, later, as I became a young Hungarian I wanted to be a fearsome horse archer of the steppes. Many Hungarian reenactor remain at this era, the Hungarian conquest of the 9-10th centuries, as steppe nomads. I started to learn archery, following the methods of our world-famous mounted archer, Lajos Kassai. Besides I started to make armours and other equipment, unfortunately based on The Lord of the Rings and other fantasy movies, wasting a lot of leather and iron.

As I searched through the Internet for armour patterns, cavalry tactics and so on, I suddenly found a Mamluk military manual, called Munyatu'l-Ghuzat. It shocked me that it wrote HOW they used their weapons. Then I have found other Mamluk manuals, so called military treatises – see the list in Sources - Period texts – about their training, tactics, weapon preferences. There are many period illustrations, but they only show one moment. We can retrieve only from theese manuals the actual techniques, how they held a weapon, how they changed them, etc.

Therefore my focus get smaller and smaller, concentrating on the cultures that made theese manuals. If you search for Mamluks in Google, sooner or later you will come across some mail-and-plate armour. Theese were also fascinating to me, and I was able to manufacture a yushman, because this kind of armour needs only basic smithing techniques and tools. That time I tried to remain a Hungarian soldier at the time of the Ottoman conquest, so I wanted a Hungarian-form bow, not a Turkish.
I went to the other world-famous Hungarian, the bowyer Csaba Grózer for a new bow. I really wanted a Hungarian bow, but after trying many types a TRH Turkish bow was the best for me. I made a leather bowcase for it and a quiver of the typical middle-eastern type, so it became more and more difficult to introduce myself as a warrior of the Kingdom of Hungary.

Historical reenactment should be serious, the best to portray somebody from our own nation. If not, we have to learn a lot about that culture. In the case of the Islamic „slave armies”, like the Mamluks or the Janissaries I think it is not weird to have a man who is unusual in that area. Most of the Mamluks were of Turkish or Kipchaq origin, from north of the Black Sea. After the Mongol raids in Europe in the 13. century many Hungarian were enslaved and transported to Egypt and Syria to be trained to loyal warriors. During the Ottoman invasion in the 16-17. century many Hungarian were taken away again to serve as Mamluks or Janissaries.

Later I have found an interesting book: Hungarian Ambassadors in the East. A chapter of it writes about the Hungarian mamluks. Among them was a Hungarian man, who was captured during the Ottoman invasion of Hungary. He was so strong and fought so bravely before he was disarmed that the Ottoman Sultan kept him for some years, then gave him as a gift to the Sultan of Egypt (that time the Mamluk Sultanate was part of the Ottoman Empire). This warrior kept his Christian religion and became a high-ranked Mamluk officer, though the Sultan knew he was not muslim.

I think it is the perfect cover-story for my character.:)

I have learned basic horsemanship from Zsolt Kelemen, at Szentendre. His team try to portray Hun or Avar warriors (more or less accurately) and he teaches steppe-style riding on hucul, hucul-arabian, „cuman” and konik horses. Here is a video of him: www.youtube.com/watch?v=hXOS5fwG-GU

Now I am training my wife’s horse.

I have practiced sabre fencing at the Golden Sabre Fencing School in Budapest from Csaba Hidán. Thoose were hard, full-contact trainings with wooden weapons, mainly sabers, but lances, maces, axes and knives as well. www.youtube.com/watch?v=9SLr2I3xIx8

I practice archery on my own as a member of the Hungarian Traditional Archers Society, trying different equipment and techniques to achieve my objective goal, the Mamluk archery test. magyartortenelmiijasz.hu

I do archery, fencing, riding, make equipment, study sources, and so on. Only one of those activities could fill a life.

Therefore I would be happy to get comments and advices from other reenactors to share our experience on such a vast art.

This website was built with Webnode
You can also have an impressive website for free!
Try it out